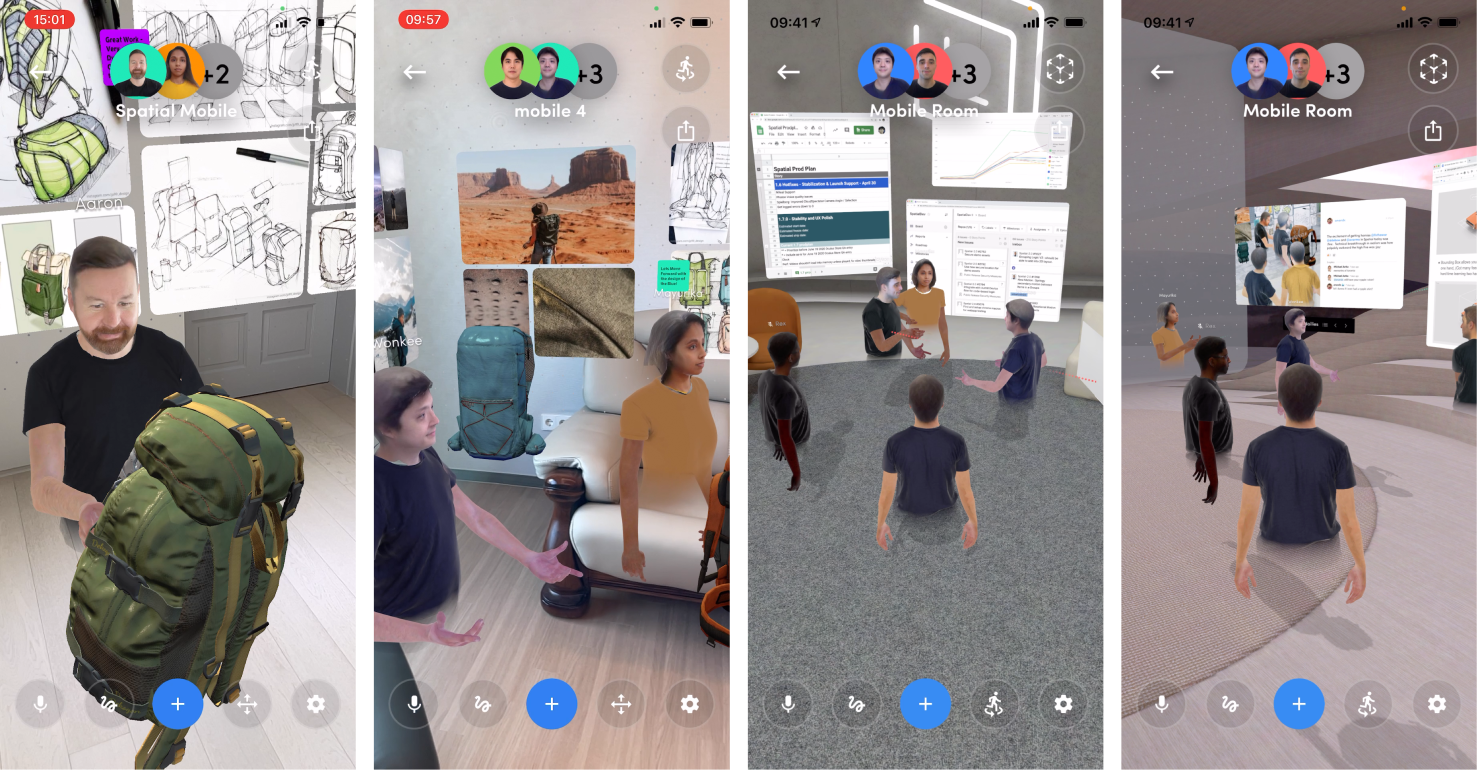 We Love Spatial on iOS and Android, Now Billions of You Can Too

This week Spatial launches our mobile application on iOS and Android. This release marks a huge moment for Spatial as well as for our users. As a platform that prides ourselves on ease of use & accessibility, we feel compelled to provide a way to participate meaningfully with the most ubiquitous devices: smartphones and tablets.

The app works in both AR and VR — you can toggle between both fully interactive experiences. Spatial is cross-platform, a buzzword often mentioned that is hugely significant to what makes Spatial unique at its core. The ability to participate in the same meeting regardless of what device you are on or have access to makes a huge impact for driving adoption.

Mobile offers our users the ability to see and utilize Spatial from a new and unique perspective. Unlike our web app, users who join on mobile show up as their full avatars in the space. They can manipulate content, add notes, and even take photos that are sent directly into the space while the app is in use. Being able to utilize all of Spatial’s features from a phone allows companies to include all of their clients and internal colleagues in meetings that utilize cutting edge technology. Often, AR/VR trials die due lack of available headsets. Spatial of course offers a useful meeting platform for the times, which now requires only the totally reasonable ask to colleagues at any level: please download this app.

2020 has been a huge year for Spatial, it is hard to believe but we only launched on the Quest, our 1st VR platform, this year. Since then we have seen an overwhelming amount of user growth. Of course the pandemic played no small role in increasing the need for remote work solutions. In May we launched publicly for free after an 1000% increase in demand due to Covid. We’ve seen 130X increase in daily active users since then. Now almost a year into the pandemic and our VR support, one can lay on their couch without a headset on at all, staring at their phone (a familiar position for most of us) and join a virtual reality meeting as a photorealistic avatar of themselves moving around with slight finger motions.

Not only is the mobile app easy to use, it also is incredibly high resolution! For example, on iPhones and iPads you can see every detail of the experience in AR or VR with magnificent clarity. Our users at DS Smith work on packaging design in Spatial. After trying the beta version of the iOS app on their iPads they elected to have their organization join team meetings that way, even though they had access to headsets. They even easily cast their phones to larger screens in the office for demo purposes. As an international company already equipped with iPads they immediately recognized the impact iOS would have on the trajectory of their AR/VR initiatives.

Furthermore, mobile enables organizations like the United Nations Development Program to be able to suggest Spatial as a means of utilizing AR/VR technology for their many programs helping underserved areas around the world. Alejandro Pacheco from UNDP Colombia describes how “People living in left-behind territories have traditionally inherited obsolete technology or nothing at all. Covid-19 has shown to what extent technology and connectivity can be an accelerator or one of the most significant equality generators”. If a technology is only available to the elite who can afford the hardware, its impact will be limited. Spatial’s mobile app is a step towards solving that problem, a hurdle for all emerging technology.

Now any of the billions of people in the world who have an iOS or Android device (with ARkit or ARcore) can try having their meetings in augmented or virtual reality. They can see what it is like to use this technology before making the commitment of purchasing hardware for their teams. And we anticipate that trying mobile will certainly encourage people to upgrade their experiences to an AR or VR headset. In our experience, it already has.

As I mentioned before, this is a moment, and a significant one. For Spatial and for anyone trying to utilize AR or VR to make a difference at their companies and in the world. Bold claim, maybe, but wait and see what we have up our sleeves in 2021.